Software Recommendations is a StackExchange site where people ask:

Do you know any software that does this and that?

It has very knowledgeable people, including specialists in niche software.
I believe that site could be useful to Patents people looking for software prior art.

I see from this question that there are community ads already running in the side bar.

QUESTION: How can I propose an ad for rotation on Ask Patents?

Last year example below, the ad targetting Ask Patents would be very different: 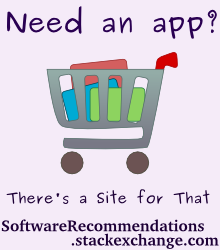 I actually happened to bring this up privately in mid-November, and after the idea floated around the Stack Exchange team, it was ultimately concluded that introducing ads of this nature isn't going to be super advantageous right now.

We're currently working on tightening down our scope and building up more of a community, so in many ways, Ask Patents is being run like a public beta. For the same reason, we just don't have enough of a following (yet!) to make running community ads super beneficial to anyone, including the advertising site, in this case SR.

I'd love to see ads introduced, and once we start developing that following I will personally ask the Community Managers to reevaluate the case, but for now, no such luck.

And just by the way,

I see from this question that there are community ads already running in the side bar.

That isn't actually a community ad, per se. It is, as I understand it, essentially hard-coded into the Ask Patents page, almost as part of the design.

Not the answer you're looking for? Browse other questions tagged discussion .

Welcome!
This site is for discussion about Ask Patents. You must have an account there to participate.
Help

3
Duplicated advertisements on the side

3
What Type of Questions is This Site For?
14
Would you be interested in Moderating this site?
1
Where is Ask Patents marketed?
2
Creating a new way of searching patents, want to know what to do and not to do
2
I want to make a difference, how do I particiapte?
4
Has Ask Patents impacted frivolous patent claims?
2
Does Ask Patents take coverage questions?
4
What to do to get this site more attention?